“As one of the founders of Pilchuck (known as 'The Peanut Farm' cause we were all a bunch of nuts!) I am continually reminded that an idea, no matter how remote the chances of success, can be a powerful thing. Pilchuck proved this and should be a shining example of what can be done when one or many are inspired to make good on their dream and create meaningful change in the lives of artists for years to come. I am proud that we had the vision and courage to do just that. Good job everyone who helps keep the dream alive”

Pilchuck Glass School was founded in 1971 by Dale Chihuly, with the support of patrons Anne Gould Hauberg and John H. Hauberg. Chihuly, a Tacoma native and graduate of the University of Washington, received a $2,000 grant from the Union of Independent Colleges of Art to run an experimental summer glass workshop. Anne Gould Hauberg and John H. Hauberg offered the Pilchuck Tree Farm’s 54 acres as the site for the summer workshop.

That first summer Chihuly was accompanied by two other teachers and sixteen students. When the students arrived, their first project was to build glory holes and a furnace. They began blowing glass just sixteen days after arriving. The artists also designed and built their own houses — the first year these were mostly plastic tarps draped over planks; the second year more substantial houses were built, including Buster Simpson’s tree-house.

The school quickly became recognized as one of the top programs in the world for glass artists. Even in the early years, students and instructors came from all over the United States and Canada, as well as from Denmark, England, and Italy.

It soon became apparent that specialized facilities were needed to support the growing programs at Pilchuck. Tom Bosworth, Professor of Architecture at the University of Washington, was invited by the Haubergs to design three central campus structures.

The hot shop was constructed in 1973-74, followed by the flat shop in 1976, and the lodge in 1977. Later, the office-gallery and the cold shop were finished, and the studio building was built in 1986. Ten years after that, as part of the 25th anniversary Capital Campaign, a second hot shop was added for glass casting.

The vision of Pilchuck as a center for artists to come together and create in glass has become a reality in ways far beyond what was imagined in 1971. Now, Pilchuck has professional staff, seasonal staff and internship programs, twenty-four hour access to most facilities, and excellent equipment. As a result, new and experienced students can make tremendous progress in a very short time.

With all it offers, the Pilchuck campus is an ideal setting for shared creative experiences, reflection, inspiration, and learning. 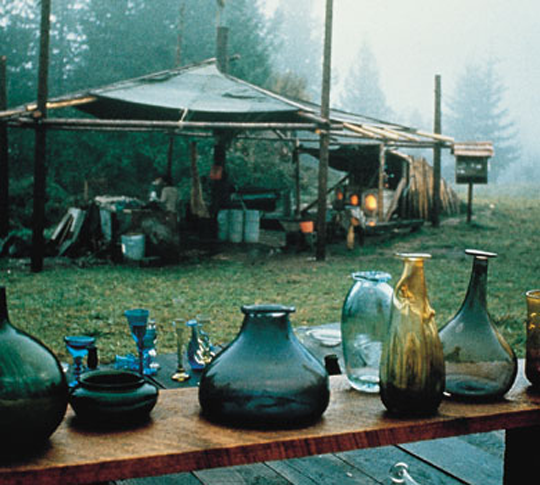